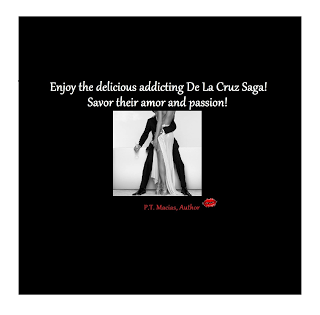 The De La Cruz Saga is an
amazing emotional roller coaster ride of romance, suspense, and intense
passion. Its steamy material is a little erotic. Enjoy their explosively
passionate nature. The saga signature theme of intense passion, romance and
drug cartel suspense is addicting.
Hot & Spicy
The bachelor battles the deadly Mexican cartel to protect
his amor and family encountering romance, tantalizing ecstasy, and danger.
Jose Enrique De La Cruz, CEO of the De La Cruz, Inc.
needs a fiancée in time for the company’s 25th anniversary celebration. La familia is anxious to meet his
fiancée, but he doesn’t have one!
His hermana (sister) Patricia agreed to obtain una novia for him. Paty enticed her amiga (friend) to pretend to be his
loving fiancée. Jessica Maria Cortez agreed to be his fiancée for two reasons:
one, she has always loved him and prays she can make him love her and two, this
is a great opportunity to achieve her dream of working as an interior decorator
design manager.
In no time at all, Jose Enrique and Jessica find themselves
budding up into a relationship with tantalizing ecstasy. With everything
falling into place for the De La Cruz’s, it looks like the entire family is
about to plunge into an ocean of nightmare and chaos before they
can say “Cheers!” for the De La Cruz, Inc.
Hot & Forbidden
In Hot & Forbidden, star-crossed lovers break the
restraints of an impossible love. Their love rocks their world flinging them
into pain, despair, and ecstasy.
Nicolas De La Cruz is hot, sensitive, and captivating.
Daniella De La Cruz is hot, sexy and sweet.
Nick and Daniella recognize that they’re alma gemelas (soul
mates). Their amor is intense and passionate transcending all boundaries.
Nicolas disappears to work in Washington. The familia is
oblivious of the emotional roller coaster that rocks Nicolas’ world forcing him
to depart. Daniella is expecting and refuses to reveal who’s the father.
The forbidden is enticing and painful. The obstacles and
chains threaten their amor? The familia’s secret is the key to unlock their
amor and to set it free.
Hot & Enchanting
Hot & Enchanting, Ricardo
Emmanuel De La Cruz is the sexy hot playboy attorney in the familia (family).
He loves the chicas (girls) that chase him and has no desire to commit to one.
Ricky literally runs into Jacqueline Cortez. She’s a bella,
shy, and quiet certified public accountant that works for the familia. Jacki
turns his world upside down.
Jacqueline Cortez has been in love with Ricardo her entire
life. She never dreamed that running into him would unleash the amor (love)
that she locked up a long time ago. Will she be able to outrun Ricardo and
avoid being his next conquest? How long can Jacki resist Ricky’s attention? Is
she doomed to fall under his enchantment and into his waiting arms?
Hot & Wild
Hot & Wild the familia’s Navy SEAL Christian Arturo De
La Cruz lives for excitement. He loves it when the risk is great, dangerous,
and complex. He enjoys the thrill of conquering the enemy when on a mission and
the chicas when he’s on leave. Christian is a carefree bachelor relishing his
life.
Monique Acosta is a young innocent bella chica. She captures
the SEAL’s alma (soul) with her freshness and charm. She instantaneously turns
Christian’s world upside down. She’s ignorant that her dream amor is a SEAL.
Will Monique understand and accept his career.
Christians desperately searches the perfect moment to reveal
that he’s a seal without losing her love. Suddenly an evil force enters his
life and threatens his amor and familia? The Seal is hurled into dangerous
warfare. He engages against the biggest menacing criminal ever. He fights
against time and evil to save his amor (love) and familia.
Hot & Spoiled
Sebastian Antonio De La Cruz
is the familia’s architect. He’s the classic traditional macho Mexicano. He
enjoys being single until the primos (his cousins) start falling in love. He
starts to think about the chica (girl) of his dreams.
Cynthia Lopez walks into his
life demanding, independent, and unconventional. She rocks his world. Tony
fights to resist Cynthia and deals with her father’s objections. Tony believes
Senor Lopez is the source of his familia’s (family’s) heartaches and troubles.
Hot & Adorable
Alejandro Andres De La Cruz
is the doctor in the familia (family). He’s always there to help everyone in
need. Alex loves to ride Luna a palomino on the familia’s hacienda. He’s hot,
sexy and very warm caring hombre (man).
Carolina Crystal Reyes is a
beautiful, sweet, young Medical Physician. She lives in the shadows and steals
his heart.

Alex lives a double life. Can anyone help him in
his time of need before losing his amor?

Hot & Dangerous
Claudia De La Cruz is a sexy,
intelligent, dedicated, and beautiful FBI agent! She worked hard to achieve her
dream. She’s too busy to fall in love. She never had an amor! She’s waiting for
her alma gemela (soul mate)!
Roberto De León sprints into
her life! Time and danger brings them together and tears them apart!
Hot & Sassy
Veronica De La Cruz is the
bebe (baby) of the familia (family). She’s an intelligent, beautiful, elegant,
and sexy mujer (woman). She’s been in love with her novio (fiancé) Christopher
Rosas for years. They’ve waited anxiously for their wedding day. One of her
dreams is to become his wife.
Veronica’s other dream is to
be an Eve’s Pleasure model. This is the only dream that she’s never shared with
Christopher. Veronica has kept this from him. She knows in her heart that he’s
totally old school and has macho convictions. She knows that he’ll never accept
his wife to model.
Christopher Rosas is an FBI
agent and Veronica’s twin partner. He’s totally devoted to Veronica.
Christopher is forced to ask Veronica to help the FBI to locate her twin.
Will their amor be strong
enough to survive her silence? Can Veronica save her amor and twin before time
runs out?
Romantic Suspense (action,
adventure, delta force)
www.amazon.com/author/ptmacias.com
https://www.smashwords.com/profile/view/ptmacias
https://www.facebook.com/pages/PT-Macias/319871778087970
https://www.facebook.com/ptmacias.DeLaCruzSaga
https://twitter.com/pt_macias
http://www.goodreads.com/author/show/6035548.P_T_Macias
http://pinterest.com/ptmacias/
http://youtu.be/n5p8k_pZ36A
http://www.myspace.com/580777542
http://razer8byptmacias.blogspot.com/
http://delacruzsagabyptmacias.com/
www.ptmacias.com
www.ptmacias.blogspot.com
www.delacruzsaga.com
38.581570 -121.494400 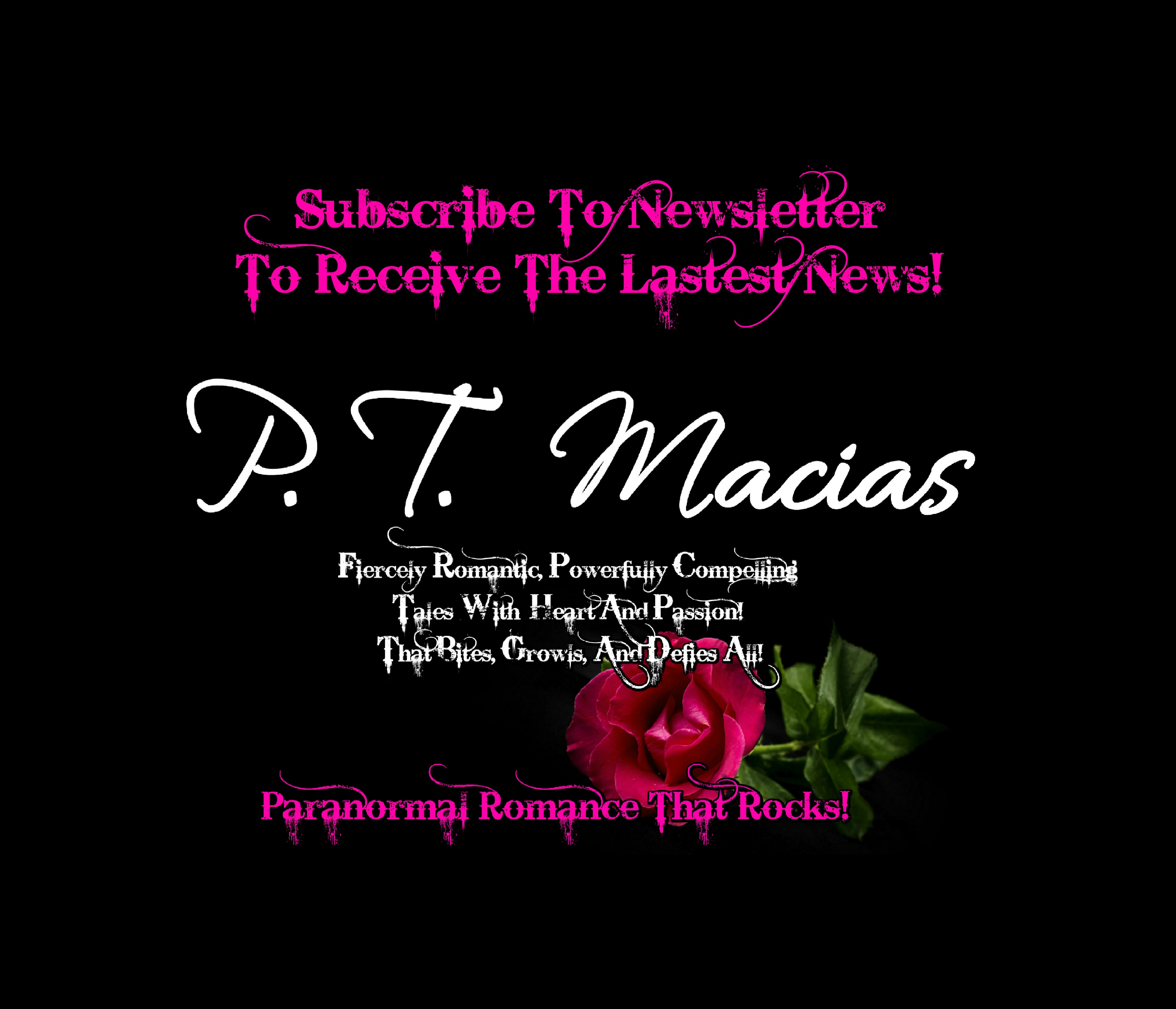